Not only communities in Sumenep reaping the benefits, but Ngee Ann Polytechnic students also gain new experiences and “perspectives” to contribute to the communities around them.

A few moments ago, HAND International collaborated with Ngee Ann Polytechnic Singapore for the first time. Even it was for the first time, the humanitarian activities were done and held in three consecutive villages. The three villages in Sumenep that received aids were Pasir Putih, Bluto, and Marengan Laok village. 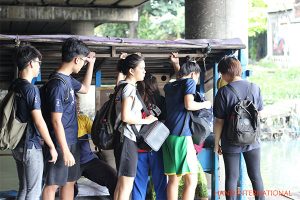 The students were not alone in doing humanitarian activities in Sumenep. Instead, HAND International also involved local volunteers who also worked hard in preparing every necessities even before the activities commenced.

Even on the last night in Sumenep after doing all activities, the students and volunteers were invited to be the “special guests” in Kraton Sumenep by the regent of Sumenep. Not only traditional dances, but traditional foods were also served as an appreciation for the students who came to Sumenep.